Earlier this week we had a brief peek into the world of Divinus Imperium, a mod that hopes to be the overhaul for Stellaris post-Banks. Today is the first in a series of articles that provide a window into the development that’s already taken place and what the modders hope to achieve with their ambitious project.

This slow-drip of information promises to culminate once every two weeks, so make sure you check back for updates. Subscribe to Odin Gaming and follow me on Twitter for news.

This week focusses on one of the largest pillars of Stellaris gameplay – the planets.

In the base game, there are 10 basic habitable planet types. Nine of these planet types are divided evenly into three climates/hydrospheres of wet, dry, and frozen; the tenth is, of course, the Gaia classification which sits in its own special climate of “ideal”.

This is probably old news to you. Just a little more old news to make sure we’re all on the same page. When you create your species, you select one of the nine, non-Gaia, planet types e.g. arid, arctic, tropical etc. Every species has 100% habitability for Gaia worlds, 80% for their own preference, 60% for worlds in the same climate category, and 20% for everything else.

Divinus Imperium will introduce the concept of the hybrid climate type, to bring the non-Gaia habitable planet count up to 12. These will have a habitability rating of 60% for species with a preference for any one of two vanilla climate categories. These are the changes made to planet types: 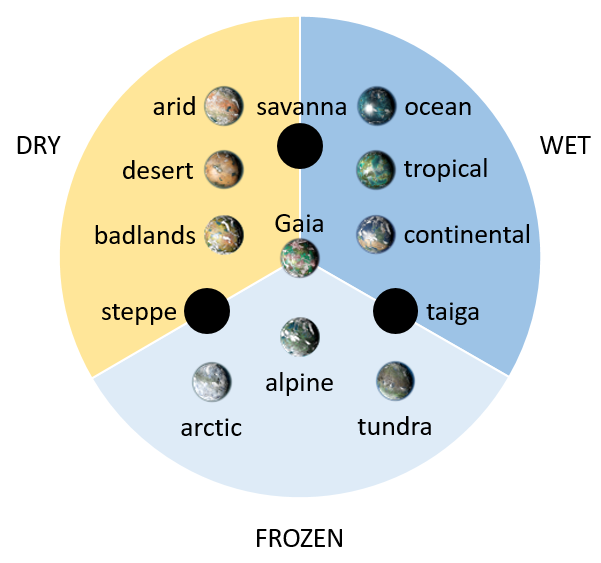 The intention is to increase tension between races from other climate types in the early expansion phase of the game. If, for example, you were playing a race with a continental preference and ended up wedged between two races with an arid and arctic preference, respectively, you wouldn’t have had much competition for specific planets in vanilla, since all three of the species were in different climate groups (wet, dry, and frozen, respectively). There would have been competition from Gaia worlds (as always) and for systems with worlds from multiple climates. The hybrid worlds in Divinus Imperium increase the chance for early-game conflict (should you require it).

These hybrid worlds are also available for the homeworld type when creating new species. However, in this case, the species only inherits preference for one climate type, for the sake of balance. Races originating from savanna worlds have a dry preference, from steppe a cold preference, and from taiga a wet preference.

Divinus Imperium adds another layer to the random number generator (RNG) behind resource deposits on the tiles of planets. An additional hidden number, which the modders call “resource tier”, will determine whether a planet will be more likely to be very rich in a particular resource deposit, or very poor, and everything in between.

A resource tier is assigned to each of the six deposit types (minerals, energy, food, engineering tech, society tech, physics tech) and to the planet as a whole. This means a given planet might have a high resource tier for minerals, a low resource tier for food, with everything else having a resource tier somewhere in between. This makes it more likely – but not guaranteed! – that the planet would end up having lots of minerals and little food, with a spattering of other resource deposits.

The motivation for this mechanism is to improve planet flavour beyond planetary modifiers. This way, a planet may well be suitable as the galactic breadbasket beyond any modifiers it might have.

Featured in last months mod roundup, Guilli’s Planet Modifiers adds more planetary modifiers and a host of other features. Check out the linked article for more information and a link to the Workshop page.

The modders behind Divinus Imperium are building upon the work of Guilliman, the mod author, to integrate aspects of his mod into their own.

“Local planetary resources” are limited to Alien Pets and Betharian Stone in vanilla. These cannot be collected across an empire in the same way as so-called “strategic resources” (including Teldar Crystals, Dark Matter, and Zro, for example), but they do act as prerequisites for certain buildings on the tile on which the local planetary resource is located.

Divinus Imperium will add more of these local planetary resources with new building options for those tiles. The intention is to have multiple options for building on these special tiles to instigate a trade-off between instant reward (emulating instant extraction and sale, for example) and long-term investment (akin to extraction, refinement, and manufacture). These buildings may provide planet-wide benefits or adjacency bonuses.

A similar, but not identical, system was exploited in AlphaMod, which introduced a plethora of new strategic resources. While I enjoy using AlphaMod – and I believe I’m in good company – one of the things that often frustrated me in late game was the sector meta in which I had to ensure each sector was self-sufficient in strategic resources. This was no mean feat with the long list of additional strategic resources added by the mod. This micro came at a time just when you, the player, wanted to be shedding it – when your empire was getting large.

I’m hoping that the focus on local planetary resources will introduce some additional incentive to playing the colony-management mini-game while not penalising those with a more hands-off approach too much (or, indeed, the sector AI).

There is a moderating voice amongst the developers behind this new overhaul:

I would rather not use extra buildings, occupying multiple planetary slots, with the pretense of a complex supply chain. This adds excess micro which, in my opinion, hurts the AI. The complex supply chain doesn’t exist, so give players the option to build for direct or indirect reward, which simulates the entire supply chain in one tile.

The team are looking for feedback from the gaming community to see if they’re on the right track with Divinus Imperium. Let them know what you think by filling out the form here.

News about Divinus Imperium will come exclusively through Odin Gaming, so make sure you subscribe and follow me on Twitter for the next instalment, as well as other gaming-related posts!