Hiding behind some of the mods of Stellaris are stories many years in the works. Undoubtedly, Stellaris (like other Paradox games) provides an opportunity for story-telling as players share their galactic exploits. While most of these stories are generated in-game, some modders have taken the opportunity to juxtapose their own novel stories onto the gaming platform. Shane Watson is one of them with his 30-year-long project The Outer Rim.

In this post I take a bit of a dive into Shane’s world to see what his project means for Stellaris modding. A quick introduction to the project, in his words:

From the human perspective, [The Outer Rim] was the frontier, where the trailing edge of Terran colonisation began to butt up against strange empires, and exotic cultures.

I’ve been pursuing [this] on and off in various forms for the better part of 30 years. Over the years, I’ve developed a huge love for biology and nature, working on a lot of my observations and meandering “what-ifs” into my work.

Edit: Shane is unfortunately discontinuing his pursuit of support through Patreon having found it didn’t fit his needs. His Patreon page remains present for now (last checked 30th October 2017) but isn’t being updated. 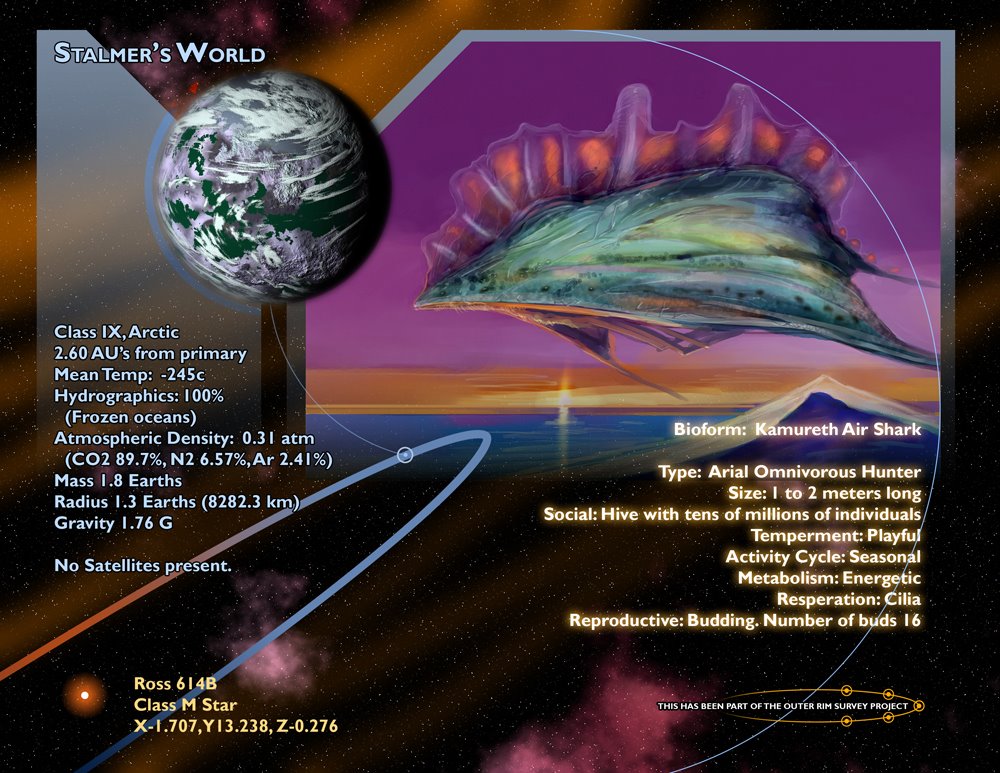 With this three-decade backdrop, Shane began working on The Outer Rim in earnest at the start of this year.

I was looking at the numbers of subscribers to Alien Suns, and I thought, “You know. This needs to be bigger.” And, as a plus, it forces me to work on my art when I would otherwise be goofing off.

Stellaris players might be most familiar with just one part of Shane’s project in the form of a static portrait pack, called Alien Suns. There are some incredibly unique creations in the pack which hugely expand the variety of creatures you’ll meet on the galactic stage.

Alien Suns is the immediate outlet for The Outer Rim.

Alien Suns (the first mod) was done solely for the game, but was pulling from a lot of the ideas that I’d been kicking around for decades; races like the Nloam, Murrandal, and Nomouku, for example. With The Outer Rim, I’m flipping that model and focussing on the idea of exploration/story-telling first, then delivering the portrait to the game.

Alien Suns is the first in a series of mods. Should Shane be able to develop the project in the direction he wants, he expects to land several mods with about 18 races each. Each portrait is hand painted, so limiting each pack to 18 portraits keeps the work manageable and gives a well-defined starting and stopping point.

Update (30th October 2017): Shane has released Alien Suns: The Outer Rim and Alien Suns: Atmospheres on Steam. Make sure you check out his amazingly high-quality mods if you’re at all interested.

All of Shane’s portraits are static. While he’s too modest to impose on the community, I am quite willing to ask on his behalf: Shane would be willing to work with anyone familiar with Maya to animate these portraits for the benefit of all Stellaris gamers. There’s even a custom portrait in it as compensation! Get in touch (send me an email through that link or Tweet at me) if you’re willing and able and I’ll make the introductions.

This also helps Shane to achieve his larger goal, which is compiling these portraits (alongside detailed descriptions of biology, culture, habitat etc.) into a sort of encyclopaedia or codex, an example of which is below (place-holder text for now). 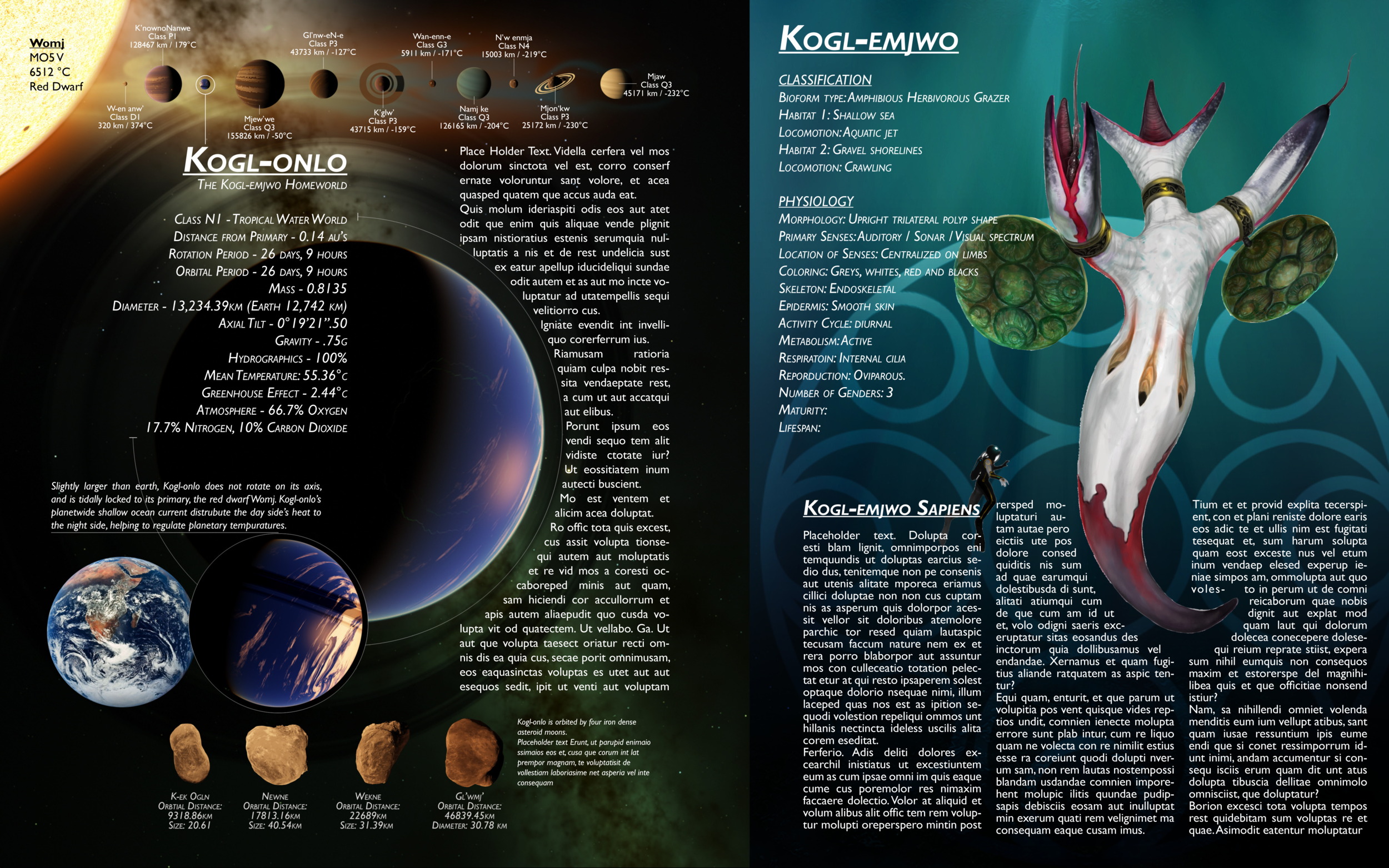 I want the reader to feel like this is not just part of a much bigger world (it is), but also knock that suspension of disbelief into overdrive.

What we’re getting with Alien Suns and the limited amount of publicly-available media regarding The Outer Rim as a whole is a peek into a colossal and novel world that Shane is just now sharing with a wider audience. Shane has shared a summary of the state of the universe he’s describing through his work:

There is first the Terran Environs where humanity has colonised. In this setting, we’re about four to five thousand years down the road. There have been a lot of technological ups and downs along the way, so there’s a wild mix of technology ranging from stone-aged colonies that failed socially and technologically but succeeded in that people survived, all the way through to highly advanced tech.

The Core Worlds are centred around Port Cynthia, the political and economic capital of The Coalition – the largest and strongest human political entity of the time. (It’s also an asteroid environment – reasons for that, as well.)

Moving outward, you have the Nova Empire, which was a military arms manufacturer that, well, just got tired of selling arms and became a political body.

Spinward is the Rhyllian Empire – a loose-knit collection of “pirates and terrorists”. They and the Nova Empire reside in what is collectively know as the Outer Core Worlds and Inner Rim Worlds. Beyond them lies the Outer Rim. That’s where we start butting up to alien civilisations and unexplored and uncharted space.

Shane has achieved his in-depth descriptions and explorations of alien physiology with a love of biology and nature at his side, and just a couple of friends that are local biologists to help filter out the truly implausible (although who’s to say what is and isn’t possible in exobiology?).

Intricate biological studies of fictional creatures has become a bit of a favourite pass-time amongst Stellaris fans. Joseph Pierce has started a compilation of Stellaris empires with a scientific slant here. Others have been influenced by a freely-available textbook on xenology here.

Are you similarly-inspired? Get in touch – I’d love to hear your story!