In previous careers, I’ve always gunned for Duna. Everything I’ve read suggested it was easier and, indeed, in planning for my mission to Eve, I would be inclined to agree. Eve’s gravity is punishing if you want to land and, crucially, recover a manned mission.

Not wanting to take half-measures, I want to explore the Eve system as fully as possible with this one mission. That said, I don’t think actually landing a Kerbal on Eve will be possible with my current funds and tech level.

A manned mission to Eve is not an easy task when doing the minimum considering the USI mods – the round-trip will likely be on the order of a year (426 Kerbin-days) and the space station I created for the Mun was only able to support Kerbals for 70 days, tops. So I’ll be carting a fat-ass station along for the ride, essentially, with all the supplies and habitation I might require.

So in addition to making it to Eve and back, I want to do the following:

This will be the first time I’ll have to construct a craft in orbit. Not only that, I will require no fewer than six launches to get everything up there. Here’s the breakdown:

This mission comes with a total cost of 1,697,778.56 spacebucks, making it the most expensive mission I’ve ever carried out. A lot, if not all (and then some) will hopefully be recuperated from some of the contracts I’ll be fulfilling.

In the best-case scenario, construction will go something like this:

As with any KSP mission, there are guaranteed to be bumps along the way. That’s included in the planning.

I ended up installing a number of graphical mods to make all this effort more worthwhile. Check out what I did and how I did it at my post here. 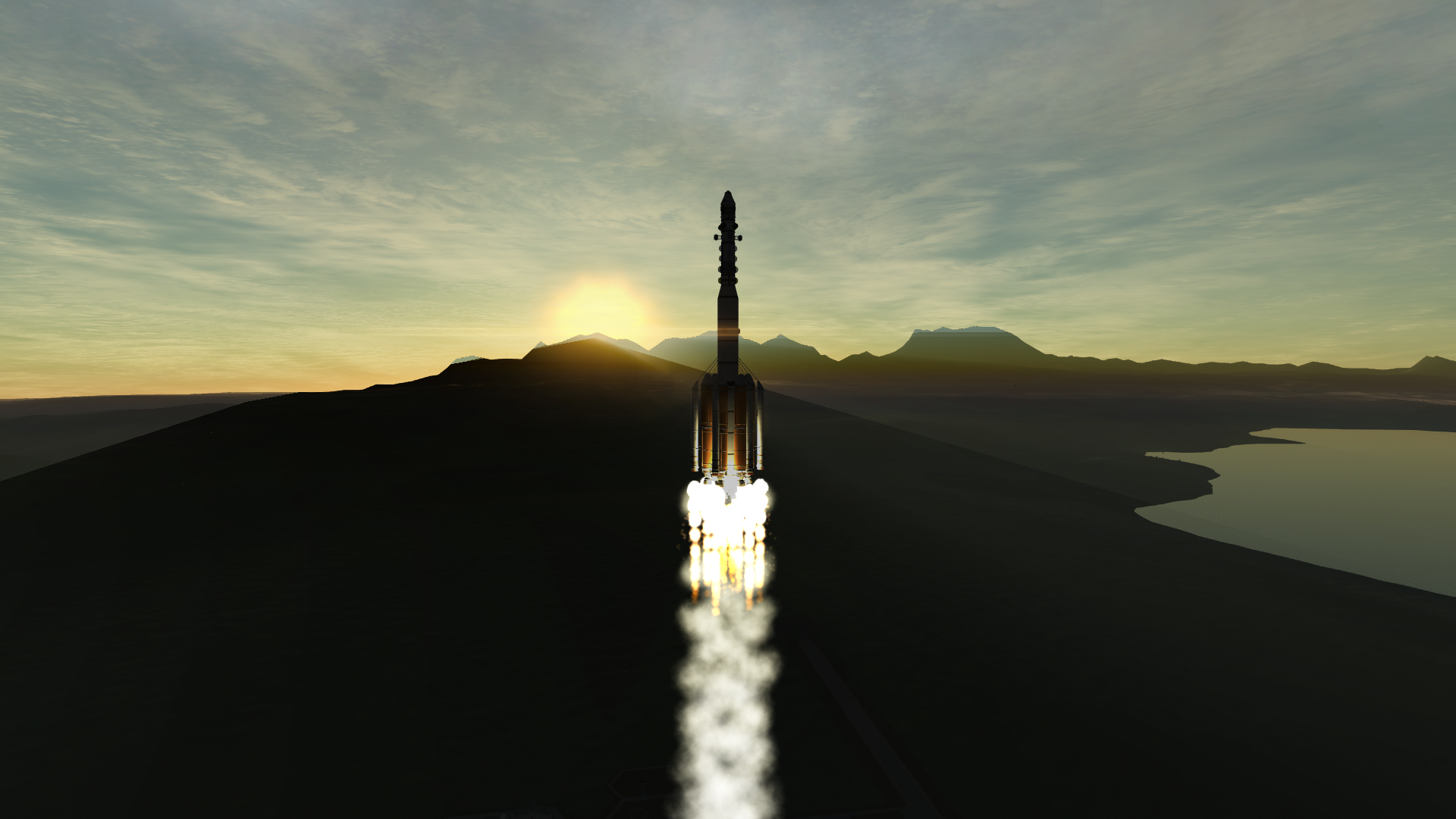 I kicked things off with a beautiful sunset launch. Carbon I was the least problematic of all my launches, although this may just have been because it was the first and problems became apparent later. This was my first time using MechJeb ascent guidance and it is a GOD SEND. 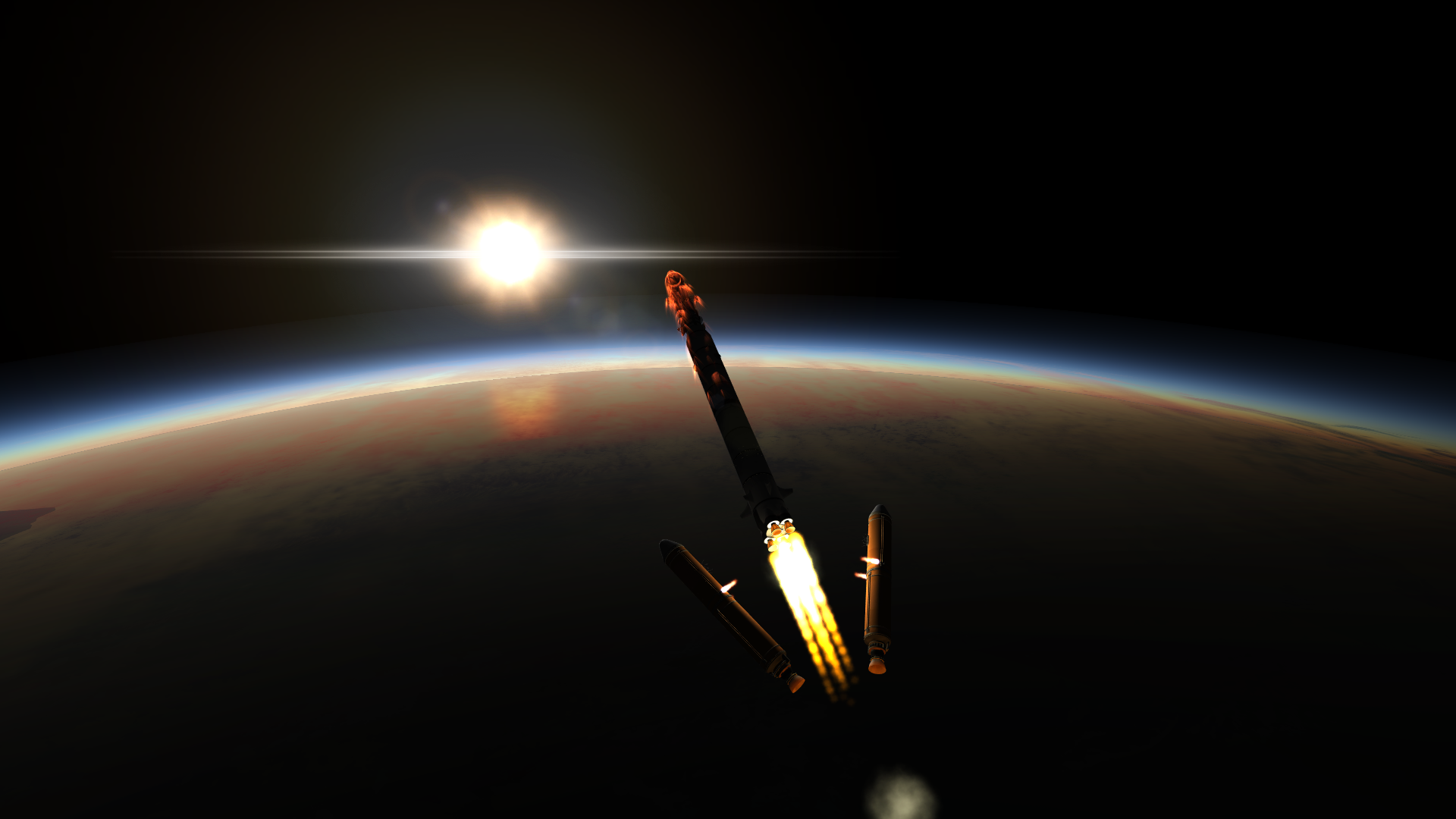 This was also my first time using sepratrons due to some bulky engines and dense staging. 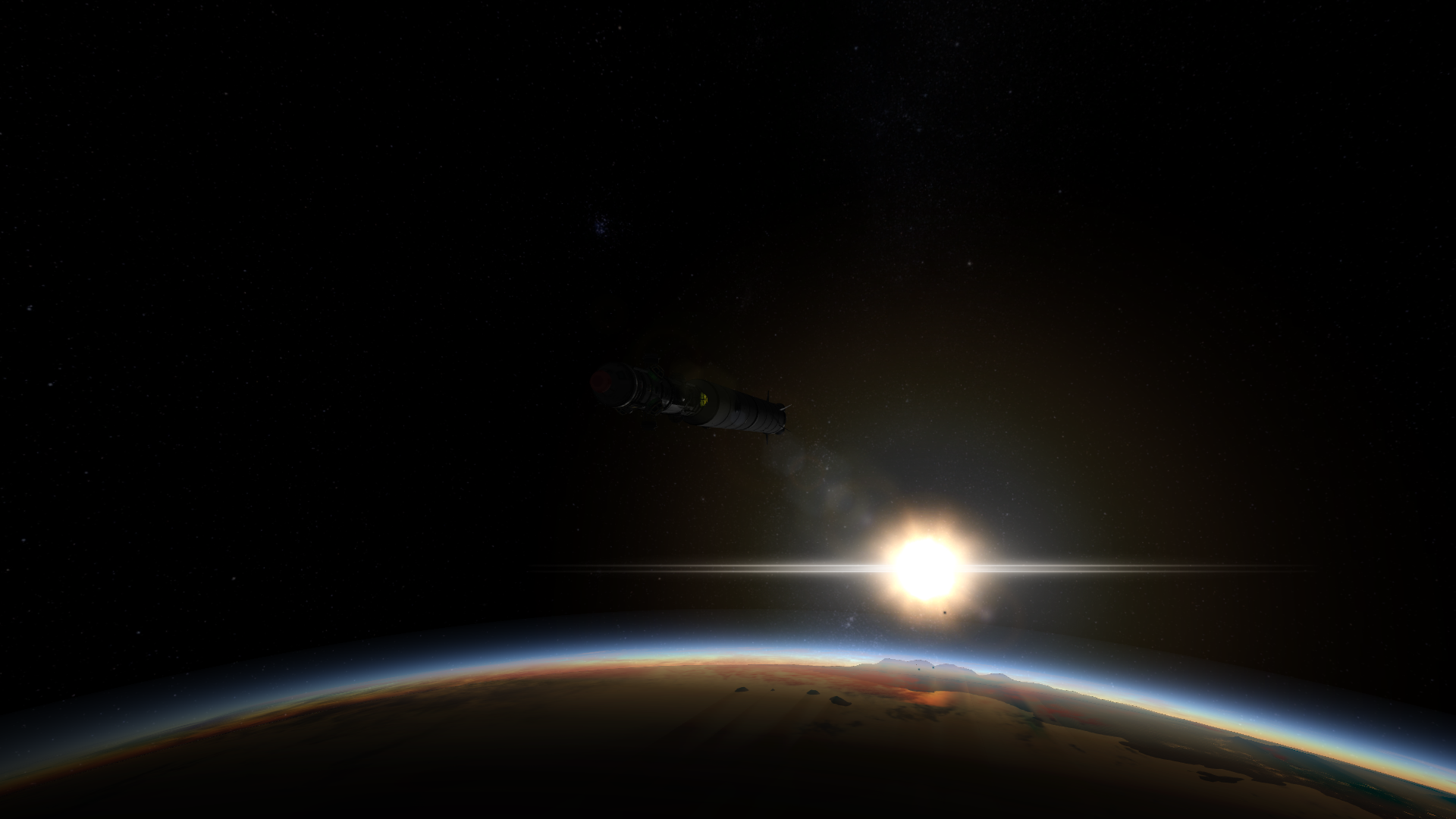 The graphical mods really do make the game an order of magnitude more awe-inspiring. The shadows off the mountain, the atmospheric effects, and the sun flare make even something as mundane as circularising an LKO something to look forward to.

Carbon I hosts all three Kerbals for this mission with ample habitation and supplies for their interplanetary journey. (What I hadn’t realised up until this point is that you must manually activate habitation and life support functionality for various USI modules; their effects don’t just kick in. This was the reason I was getting relatively little time aboard the Mun space station mentioned in Part 2.) 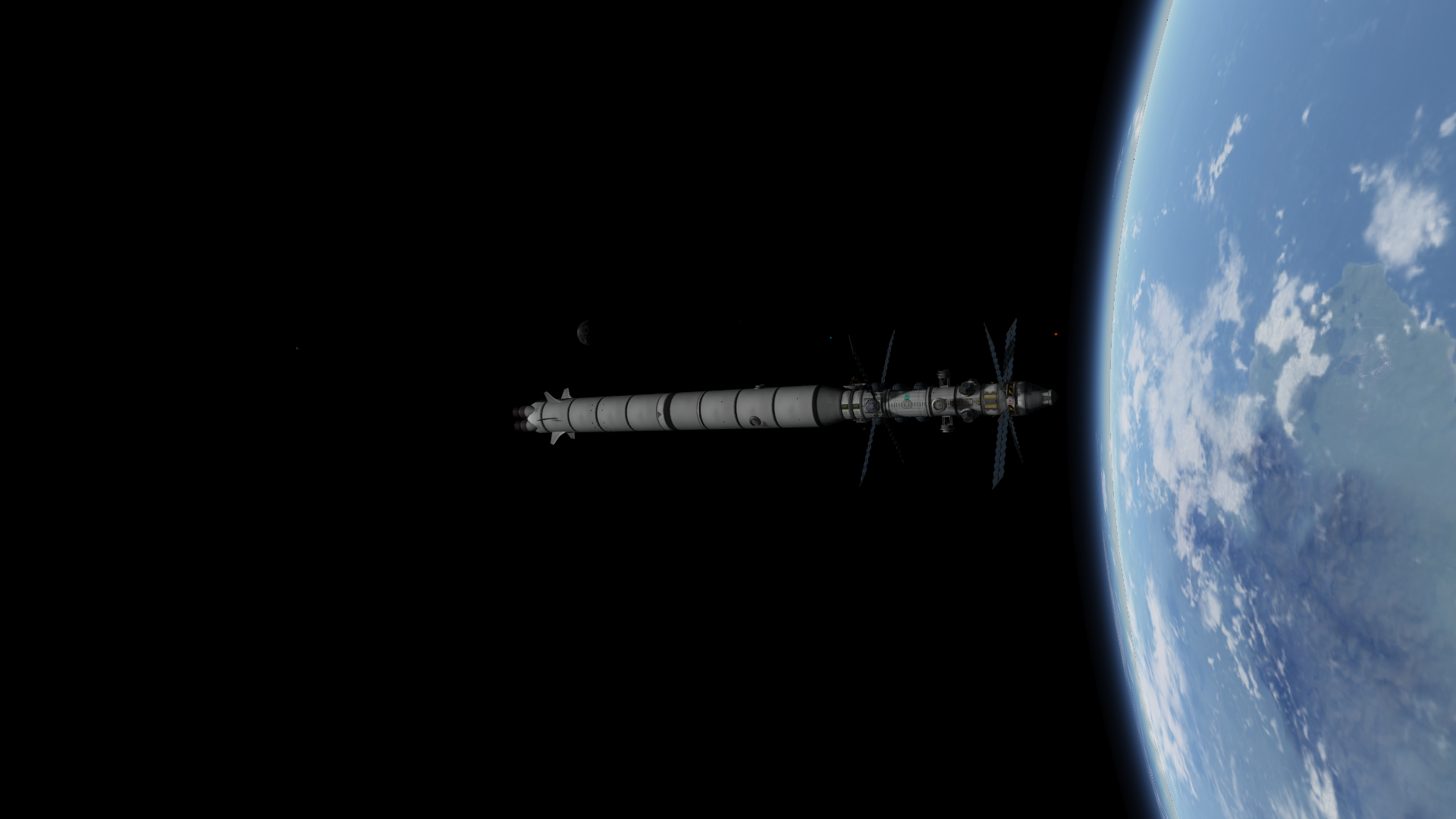 Above is Carbon I with a little dv left in the orbital stage and solar panels deployed. The Mun can just be seen above Carbon I and I think that’s Duna just to the left of Kerbin (which is visible thanks to the Distant Object Enhancement mod.) 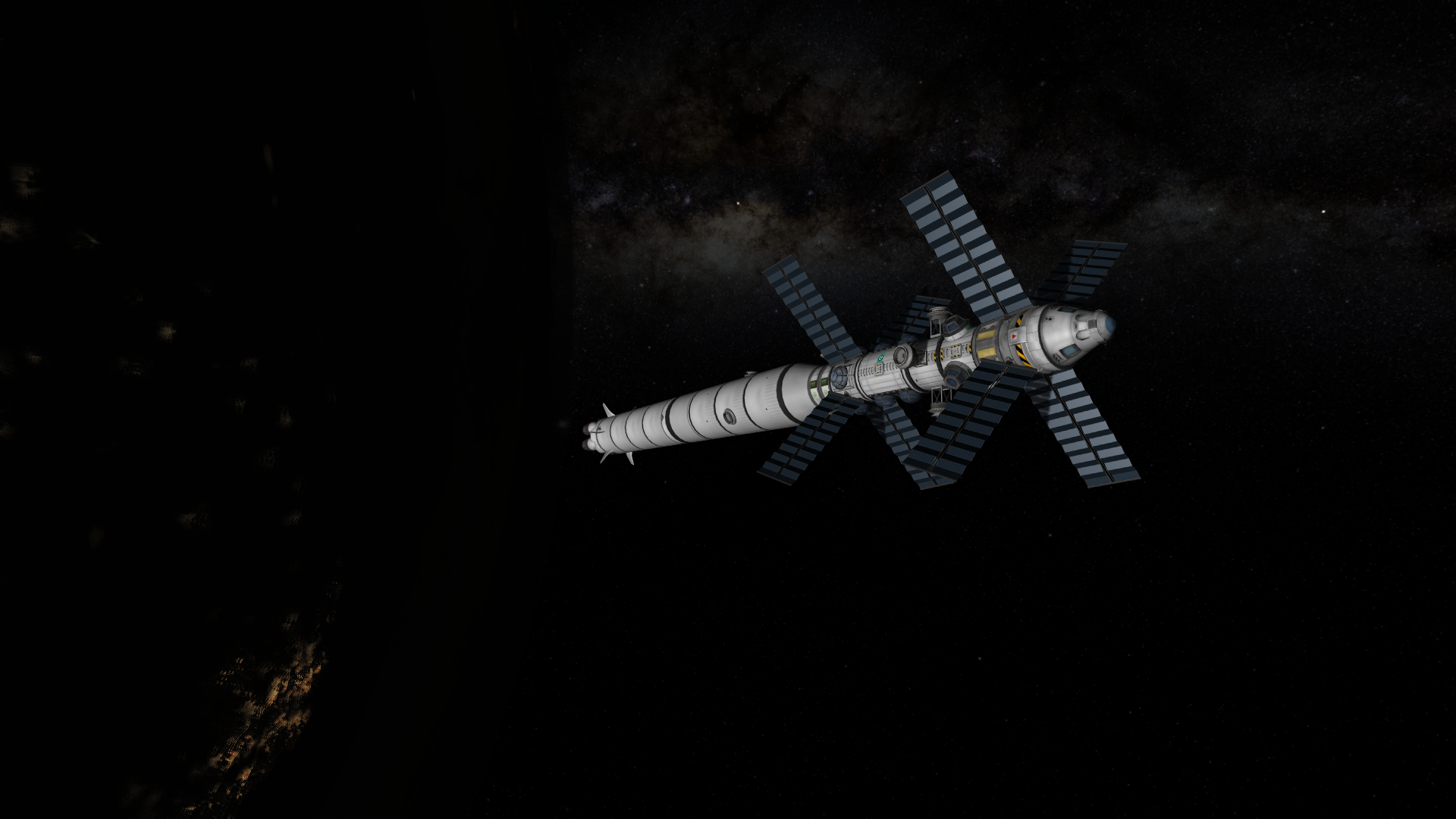 Carbon I is seen again above with more visual enhancements; cities on Kerbin and an improved (in my opinion) skybox.

What happened to Carbon II and III, you ask? They weren’t up to scratch. Carbon II used a more complicated design involving a tug to manipulate the extra fuel tanks; the tug was far too puny for the job I was expecting it to do (see image below), which is why I scrapped the idea and opted for probe-core-controlled individual fuel tanks. 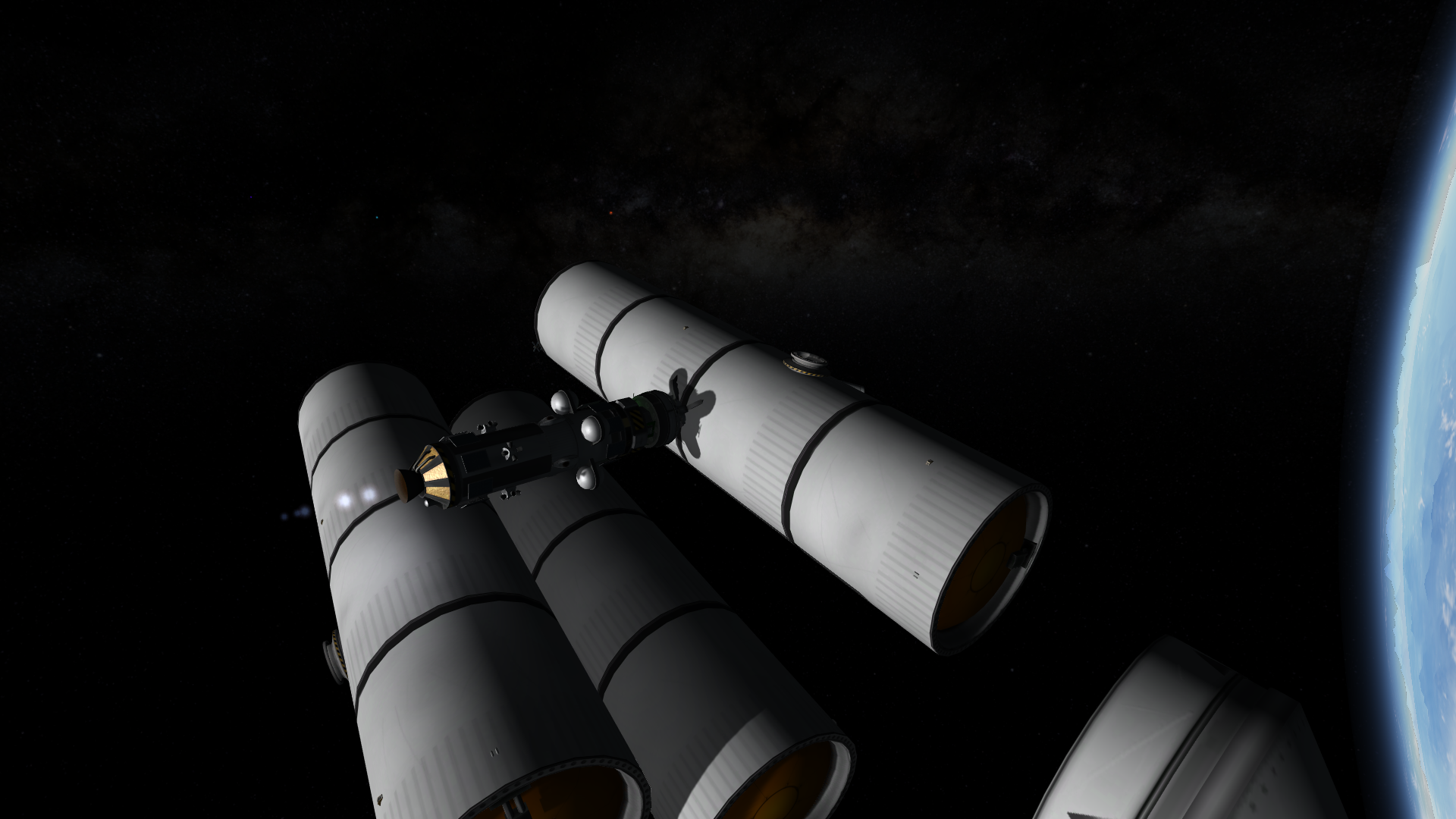 This ended up saving me about 100,000 spacebucks overall, as well. Carbon III was much like IV but structurally inferior.

I had to give this a few goes. Carbon IV needed a lot of fuel to get to orbit and the massive fuel tanks each needed four sepratrons to ensure there were no fatal collisions. (As it happens, the outermost fuel tanks were so closely packed that some of the sepratrons ended up getting clipped off as the asparagus staging was undertaken.) 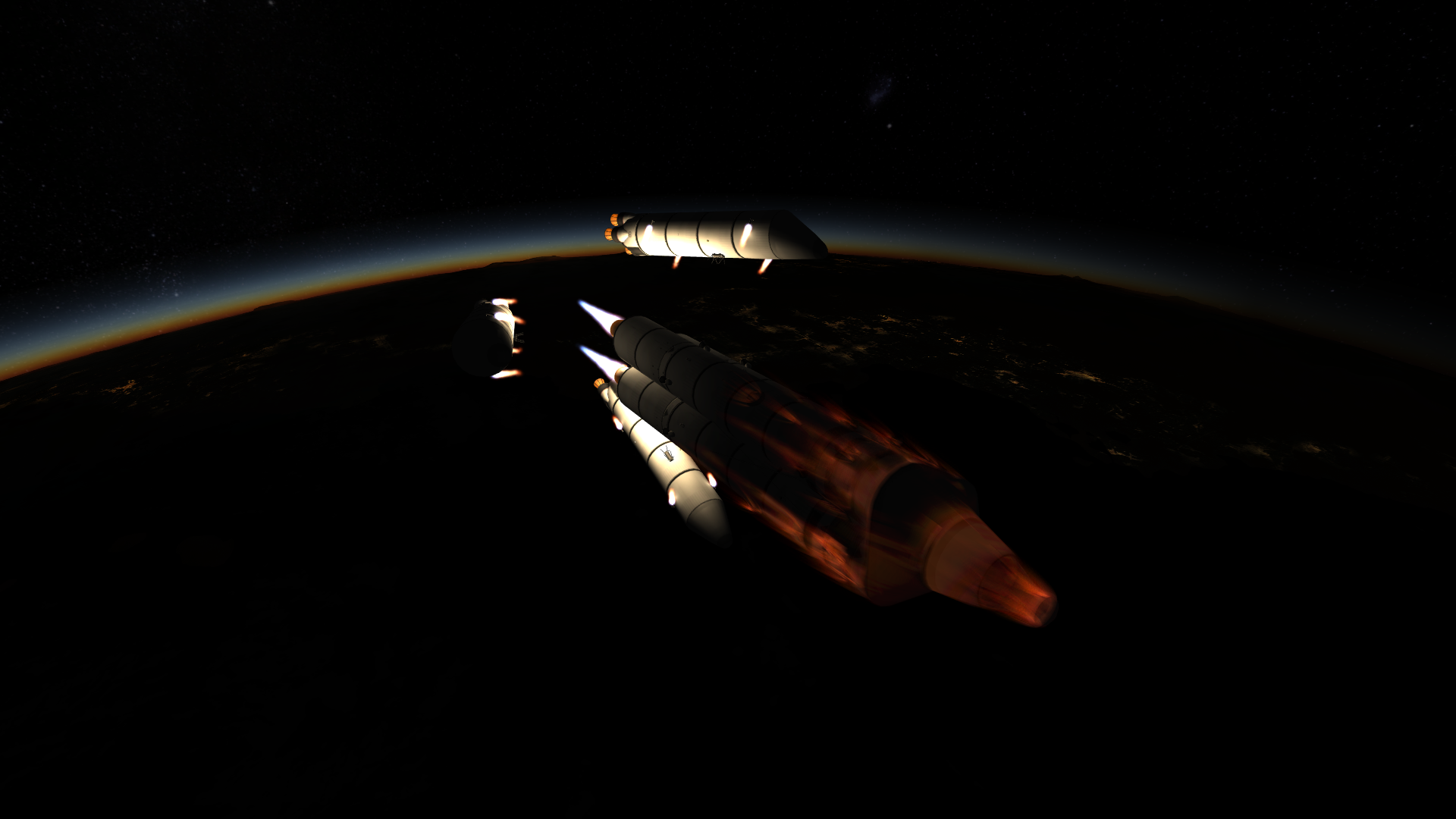 This bit was tricky. Understand that my situation was something like this: 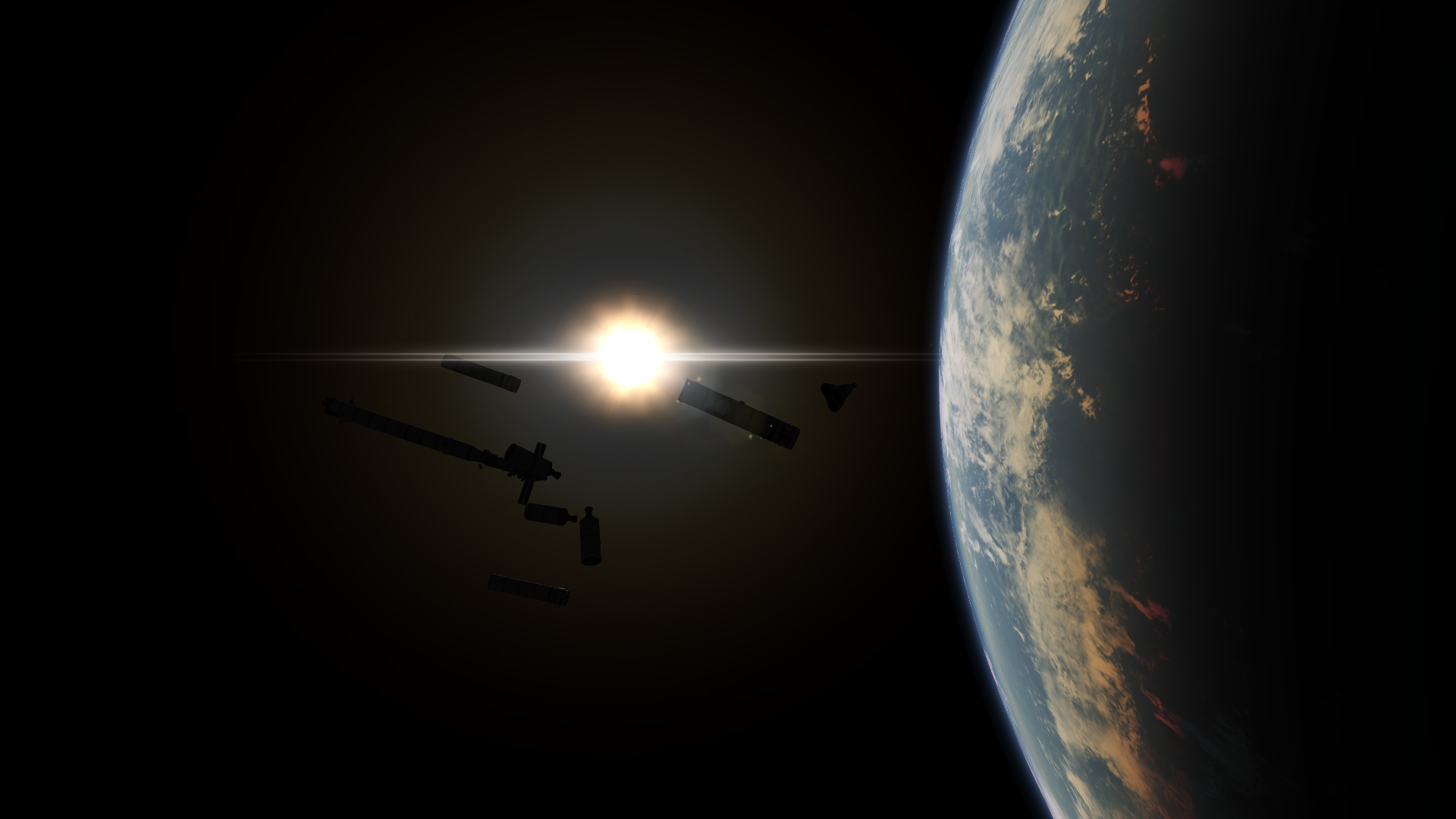 Lots of debris and three fuel tanks to dock with Carbon I. My first priority was to get each fuel tank as close as possible to Carbon I without actually docking and then reducing the relative velocity to zero. This was because, as you can see in the image, I’m about to run out of light and hadn’t planned for docking in the dark.

Once this whole mess had emerged around the other side of Kerbin, I got to work docking the fuel tanks. As I docked each one, I used KAS to attach the CS-R2 Portable Struts from Carbon I to the radial fuel tanks. This was because I was worried about the tanks exploding as soon as the finished vessel came under acceleration. (This wasn’t entirely unwarranted – more later.)

Two docked, one to go!

At this point I decided, for whatever reason, to double check the behaviour of the fuel transfer of the docking ports. As it happens, fuel flows outwards radially by default, which is the complete opposite behaviour or what I wanted here. The idea was that the outer fuel tanks (that I spent so much time carefully docking) would more-or-less empty on the way to Eve. I’d then dump them and travel back on a full central fuel tank without all the extra mass to worry about.

I thought KAS had the answer in the form of the CC-R2 Connector Port, which allows you to pump resources from one place to another in much the same way as the vanilla fuel pipe. This, however, also didn’t solve the problem. I realised (much later) that these were causing balanced fuel drain from all fuel tanks on the craft. Better than the vanilla case, but still not what I had anticipated and a behaviour that would surely leave me stranded around Eve, or perhaps in some orbit around the sun.

The answer was to install an additional mod. (I don’t consider it cheating when the behaviour I’m observing is contrary to what I expect.) I used TAC Fuel Balancer which allows you to define whether fuel should flow in or out of a tank, or whether it should balance. Using these options, I set the central fuel tank to “In” and the radial fuel tanks to “Balance” so that they could all be jettisoned at the same time at some point in the future.

The launch of the various scientific vessels for Carbon I were all much the same – once more, thank goodness for MechJeb ascent guidance for making this part, at least, a breeze.

Borrum II on the launch pad 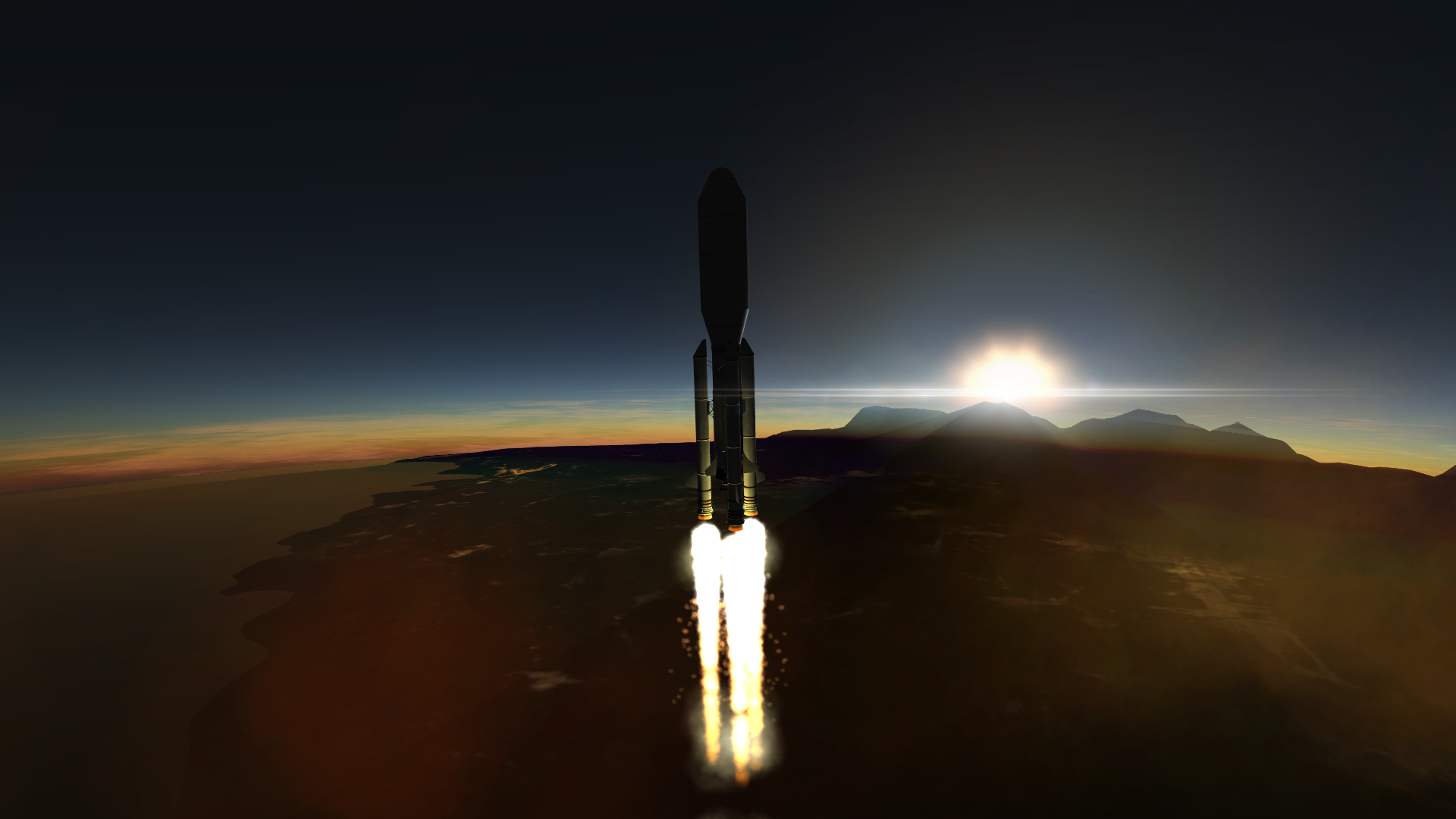 I hadn’t anticipated MechJeb’s auto-deployment of solar panels to be an issue, but it would become one once the flower-arrangement of panels on the Turing I satellites deployed, preventing proper docking with Carbon I. 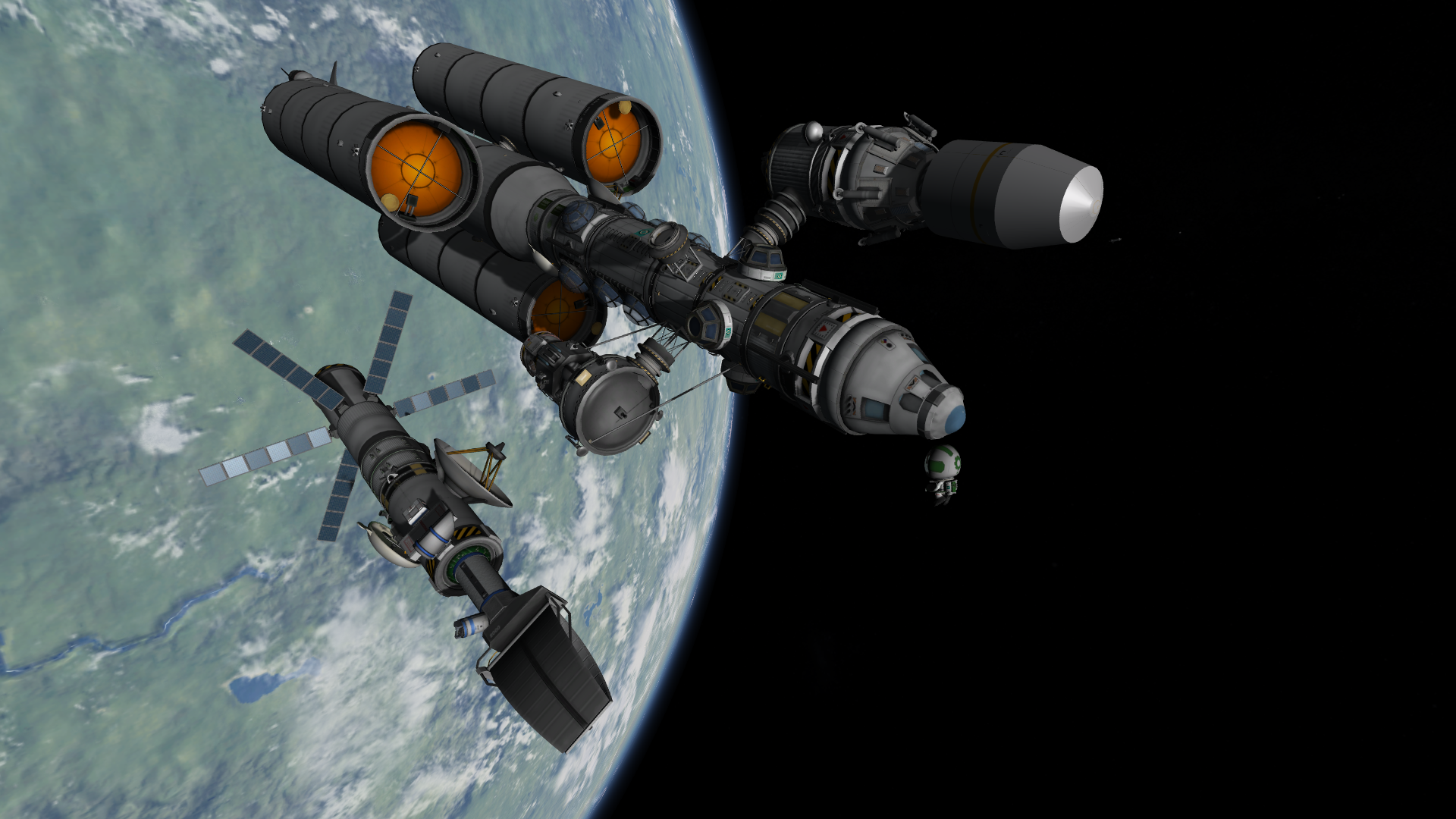 KAS helped once more in this situation as I was able to remove one set of panels from each Turing I craft to enable it to dock. Aside from making me twitch a little because of the asymmetry, this is unlikely to hinder the mission as I tend to tack on these panels with redundancy in mind. (They’re pretty fragile, but cheap enough that it doesn’t matter.)

The finished vessel is a little… rickety. 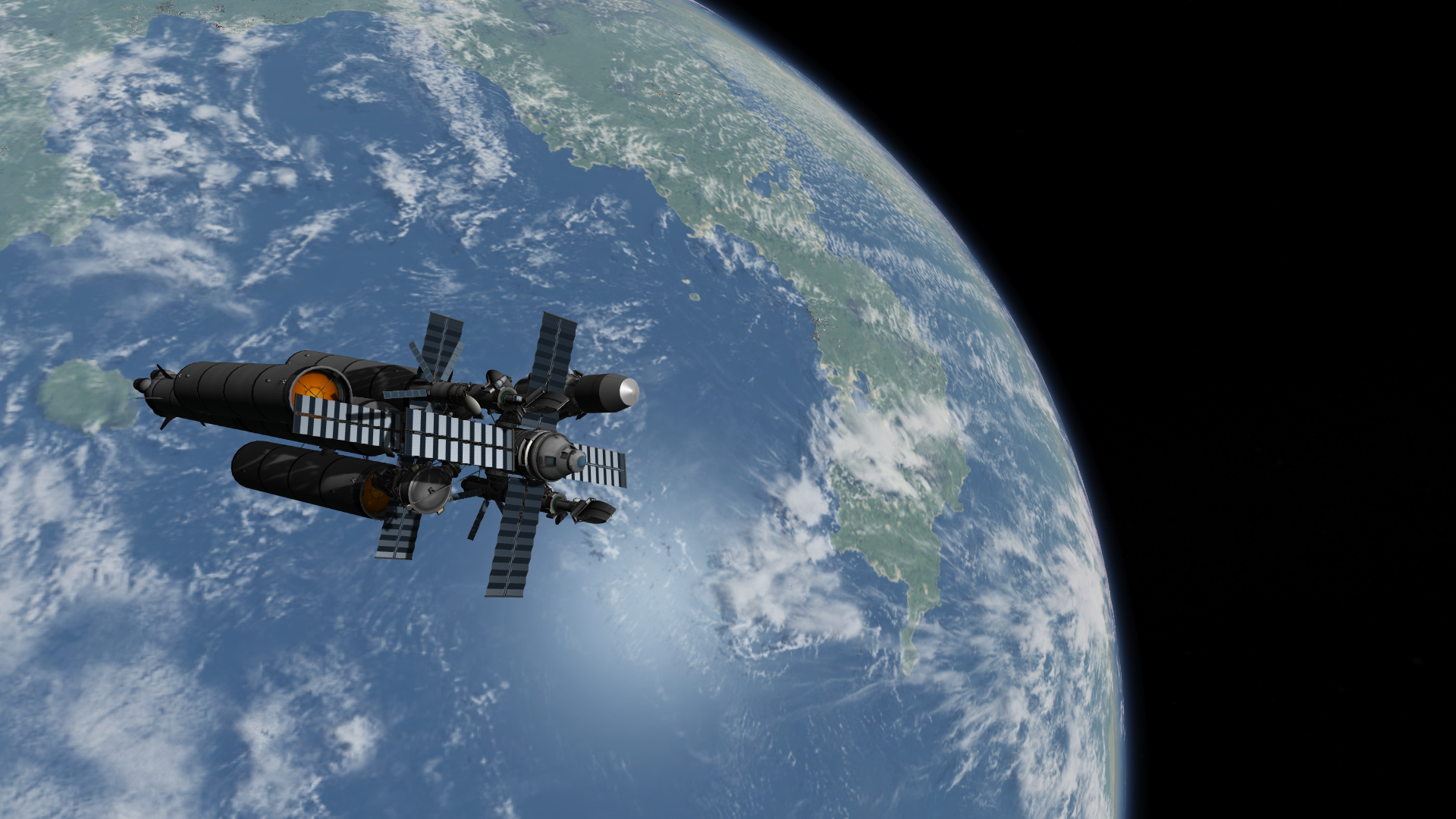 One of the fuel tanks docked a little wonky, as did Borrum I, giving the whole vessel a bit of a visual tilt. Given the lack of atmosphere in space, I didn’t anticipate this being a big problem. 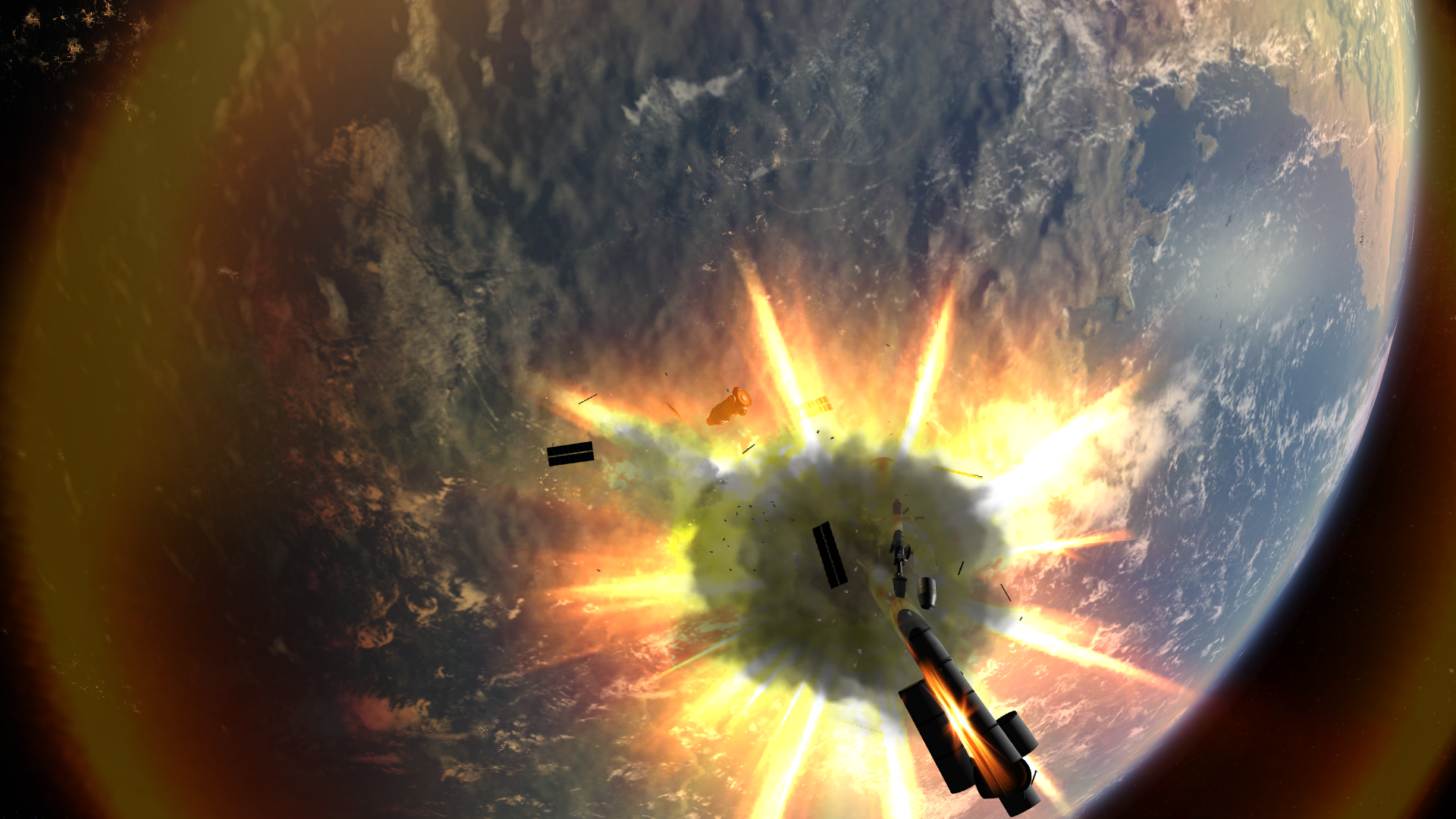 I was wrong! Even with the portable struts, the vessel was just a bit too wobbly when under acceleration, resulting in parts colliding and the above mess.

I was able to accelerate with the main engine at 30% thrust, but no more. This resulted in ~20 minutes of burn to get on the required trajectory to Eve (<1000 m/s dv). This was too long – at some point during the burn the dv requirement started increasing again. I’m guessing I progressed too far along the orbit, was turned too far in the wrong direction, and was thrusting too slowly to be able to get back on track.

To up the thrust a little, I installed the Kerbal Joint Reinforcement mod which pretty much does what it says on the tin. I think we’ve all had a rocket or two shored up with struts that are mostly aligned vertically just to stop it wobbling apart on ascent. This mod stops the need for that.

It also meant that I was able to bump the thrust up to 50%, which turned out to be enough to complete the burn successfully. 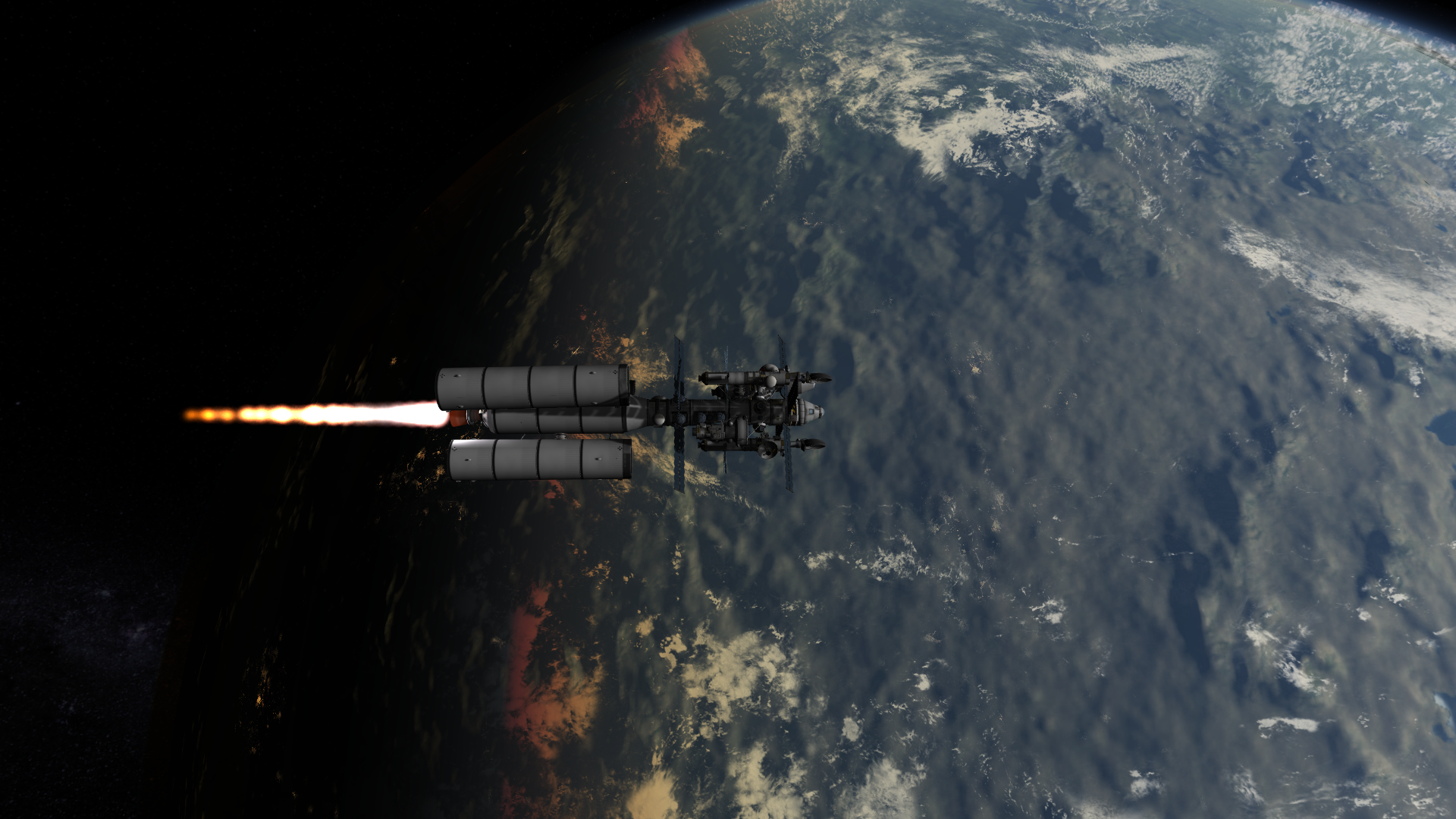 One of the advantages of having all of the science vessels docked with the main station is that science can be done en route, data gathered for the mobile processing lab, physical samples retained for the triumphant return of the kerbonauts, and experiments reset as required by the resident scientists.

On the way to Eve I made sure to gather all the samples I could and analyse data with the mobile processing lab. I think I was able to generate >2000 science just flying to Eve this way. 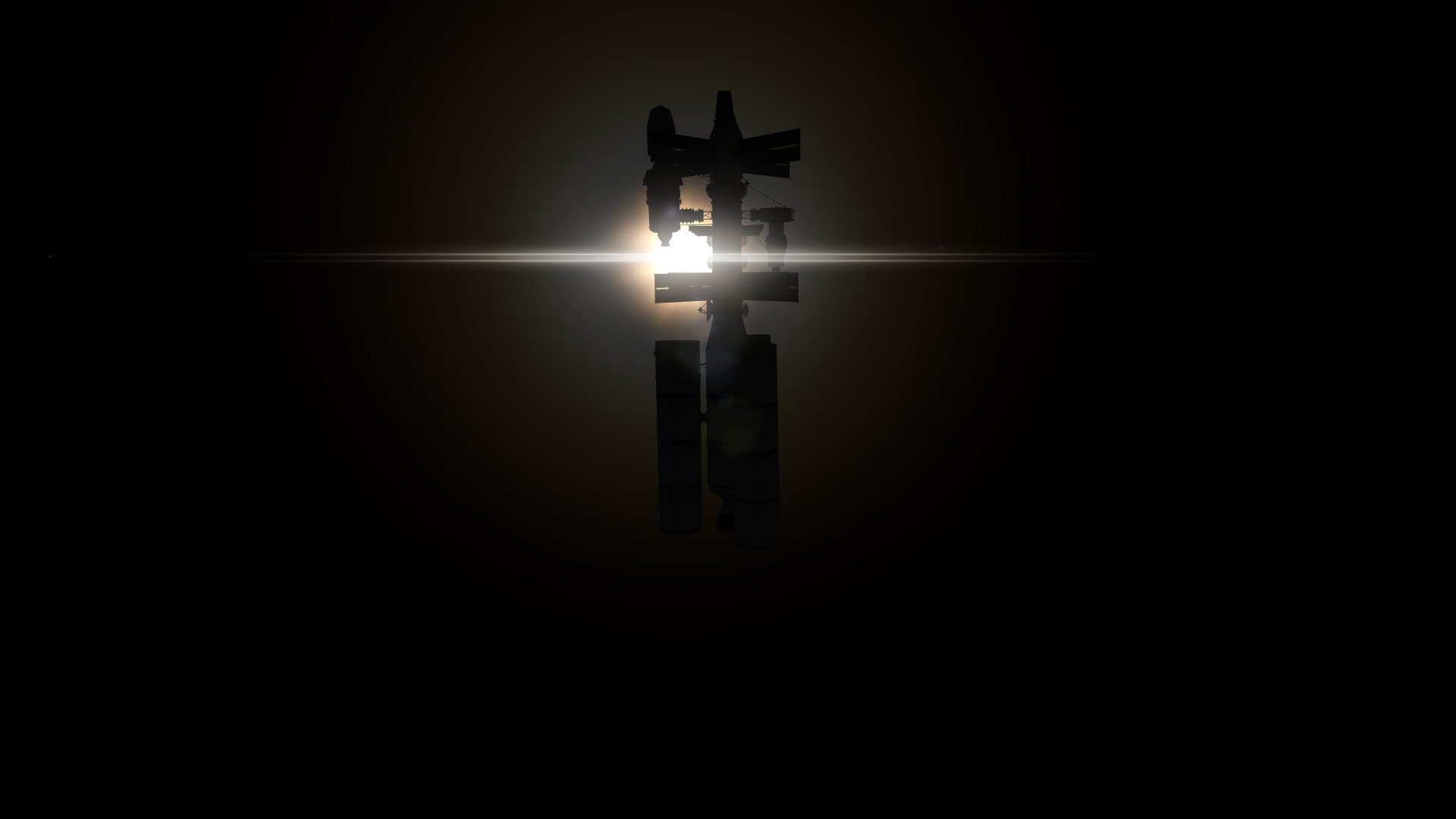 I took the opportunity for a low dv plane change, too!

Even though I’d planned for an insertion burn, I did try for an aerobreak once in the Eve SOI. I used an aerobreaking calculator and determined an altitude of 57 km would be necessary to do what I wanted.

I was a little surprised that I didn’t seem to witness the effects of any aerodynamic forces until I hit ~52 km. I thought that Eve’s atmosphere extended as high as 100 km. Even stranger was that the heating effects were almost instantaneous below 52 km. I wonder if some mod that I’ve installed as affected Eve’s atmosphere adversely.

Check back soon to see the result of my endeavours and some beautiful Eve shots aided by the graphical improvements introduced by the mods.