The century following the turn of the millennium was really all about cleaning up the few remaining maharajas in the north of India, doubling-down on the economy, and making efforts to discourage factions from challenging me.

The borders of the Mlechchha Empire reached a natural resting point once the option to subjugate other independent Indo-Aryan rulers disappeared because… I was the only one left.

Pushing into the 12th century, expansion into the south of India was slow. There was a general pattern of:

In 1048, the lords of Bengal Empire approved the institution of the Imperial Administration Law. This gives me some amazing benefits:

The only downside is a -10 vassal opinion malus (plus the -2 stackable modifier every time you give out a viceroyalty). This seems well worth it to me given that, over time, I’m less likely to incur opinion penalties when I want to restructure my realm with revoking vassals and duchies. (I’ll take the initial opinion hit when revoking the duchy title, but then when I hand it back out as a viceroyalty, I never will again.) 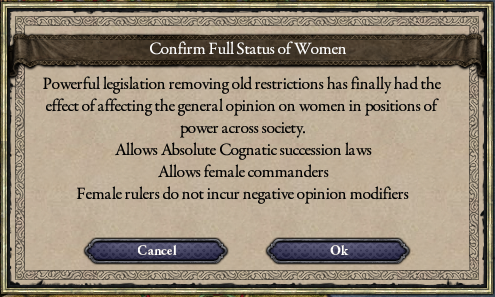 One needs to invest in the Tolerance cultural technology to keep implementing these laws.

Allowing women to hold these posts doubles the talent pool available to me. With Jainism or Buddhism, I’d be free to select any one of my children as my heir. Female heirs and rulers incur no opinion penalty if the Full Status of Women Law is implemented.

Samrat Birapala the Cruel, who ruled from October 1115 until July 1151, had no fewer than 10 daughters and only a single son. It’s no surprise, then, that it was during his reign that a real push was made for these laws. Before he died, he was able to select his favoured heir, who came to be known as the first female ruler of Mlechchha, Samrajni Ratnavati ‘One-Hand’.

It’s worth noting that for Dharmic rulers (and perhaps other types) there is still a disadvantage to playing as a female ruler; fewer children. Given that children of concubines are legitimate heirs for Dharmic rulers, playing as a female ruler significantly limits the number of children you can have because you can’t have concubines. You also stop being able to have children after 45. These factors reduce the chances of a genetically favourable heir.

As an example, Ratnavati was only able to have four children before dying. Her father, Pushyavarman ‘the Just’ had 11, and her paternal grandfather had 13 (despite being known as Virabahu ‘the Chaste’!).

With the Imperial Administration Law at my back, I’m in a better position to start creating merchant republics. Until this point in the game, I wasn’t even aware that this was a thing I could do – I thought there were just merchant republics at game start and they were the only ones that could be. How wrong I was.

Merchant republics are a special type of realm that can engage in coastal trade. They give you lots of taxes, lots of ships, and the trade posts they build benefit nearby coastal counties. They don’t provide as many troops as feudal vassals, but the trade is well worth it.

To form a merchant republic, you’ll normally need to go through this rigmarole:

Boom! You should get a bunch of popups informing you of the newly-created merchant republic. 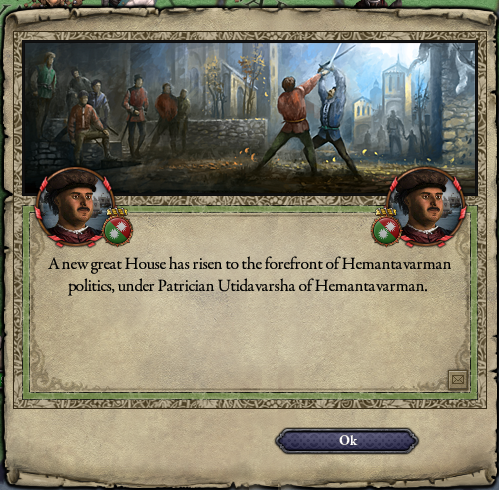 There are all sorts of optimisations to this procedure (such as which mayor you choose), but I prefer to keep things simple – this is complicated enough as it is.

I formed three merchant republics in my empire:

I found, though, that two of these (the first and the last) ended up being dismantled by uppity feudal lords. I managed to re-form the first a second time, but couldn’t stomach the hit to vassal relations by reforming the third again. I think the solution to this is to avoid giving those feudal lords a reason to conquer the republics. I could potentially destroy the titles of the kingdoms in which these republics reside.

The tax income from Merchant Rebpublics can be boosted by shifting their obligations towards tax. This decreases your levies from them, but they give you fewer levies to begin with, so it’s worth the trade-off.

I’m honestly not sure how I feel about revolts. On the one hand, they’re pretty much my only real threat at this point. On the other, strong factions seem to gather much too frequently. I always have some plot in action to murder a faction leader. Even happy vassals seemingly lead or join factions.

They seem to always blackmail me at the worst of times e.g. three years deep into a subjugation war. I suspect this has something to do with the slowly-worsening relations due to vassal levies being raised. It seems a bit silly that this opinion malus starts ticking immediately – there should be a grace period or something. Isn’t it at least partially in my vassals’ interests that the empire keep expanding?

From what I gather, I need to keep a strong military to keep the factions’ strength  below 100%. (Presumably they’re much less likely to try to blackmail me before this?) I’m trying my hardest to do this, but as the empire becomes richer, everyone, not just me, is upgrading their holdings.

There was a particularly frustrating revolt, the 7th Mlechchha Civil War to increase Council Power, which ran from 1023 to 1025. There were no strong factions just before this revolt kicked off. Between risking some spending on a new holding (to take me down to ~120 gold) and a faction with ~110% power blackmailing me were a few short days. In other words, a strong faction managed to form and blackmail me within days of my coffers running close to dry.

I had never ransomed any prisoners up until this point – I prefer to keep troublemakers locked away. But all of a sudden I was in need of generating gold in whatever way I could to support levies and mercenaries. When the war ended in 1025, I had just dipped into the red.

From this point onward, I made sure to always have 1000 gold (although I prefer 1500) in my coffers to avoid this sort of scenario. As the realm expands, I might need to make sure this is higher.

Unification of the Indo-Aryans

There were just a handful of independent Indo-Aryan rulers at the turn of the Millennium, including myself. Of course, I wanted to take this number down to just one.

Punjab fell in the Mlechcha-Punjab Subjugation War from 1005 to 1009. Gujarat was conquered in two wars. I inherited a five-year-old war in 1036 and was unfortunately on the losing side of it – when I started, anyway. The Salisuka-Pratihara Subjugation War was won in 1040, giving me a couple of counties.

I then cleaned up the rest of the kingdom in the Mlechchha-Pratihara Subjugation War from 1044 until 1048. This was an interesting one because most of the rest of India joined to defend Pratihara due to the existing defence pact. What I learned is that they were nowhere near coordinated enough and were far too busy dealing with internal conflict. I steamrolled them thusly. This bodes well for the future of my conquest of India.

Following this was my first war spilling outside of the bounds of India. Over the centuries, some of the middle-eastern rulers had managed to acquire a few counties in the western kingdom of Sindh. I was able to declare the Mlechchha Holy War for Bhakkar in 1071, winning it just a year later.

By this point there were no Indo-Aryan rulers remaining. However, in the 1130s, a revolution occurred, meaning I could start the Mlechchha-Maharastra Revolt Subjugation War in 1134. Yes, the tiny realm was experiencing a revolt when I cast my imperial eyes upon it. I could wait for the revolution to pass and hope that the revolutionaries won, or I could jump on the opportunity while it lasted; the problem with the latter option is, if I did too much damage, the revolutionaries might surrender to their so-called oppressor.

My strategy was to avoid their army and just occupy rebel territory. This worked well – I acquired three more counties when I won in 1136.

There were a couple of very interesting event lines in the time period from 1000 to 1150.

In January 1054, my Steward suggested I set up a trade route with a foreign realm. This realm ended up being Þorfinn, presumably in Scandinavia somewhere. 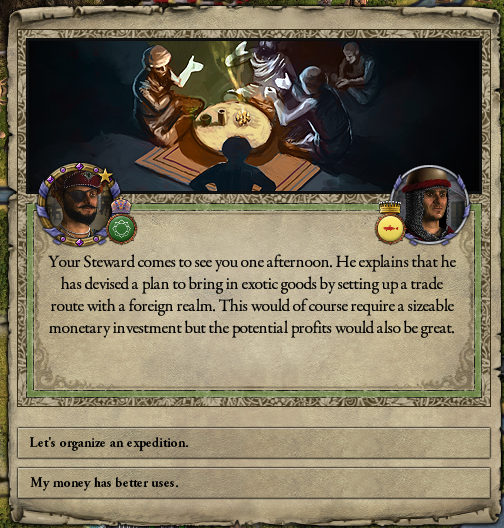 There was a gold investment in this escapade and some close brushes with expected etiquette, but I made it through, gaining the incredible Midas Touched trait, plus significant benefits to the realm because of the new trade route.

In 1123, I dove into the mystical world of Life and Death themselves. 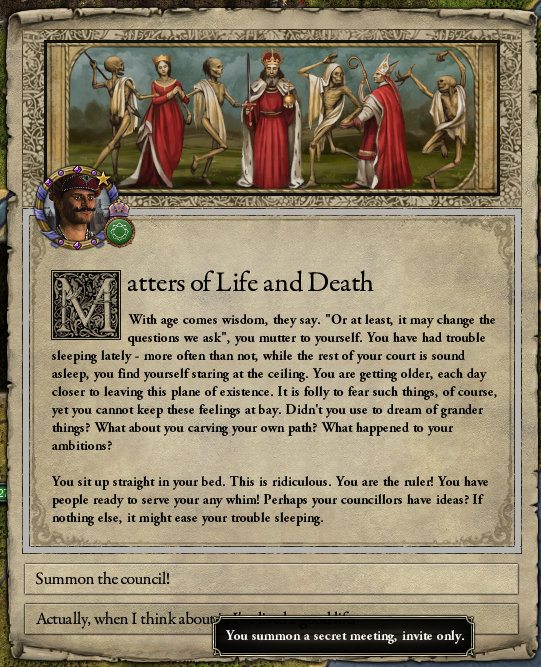 This one unfortunately didn’t turn out the way I’d hoped, although the outcome certainly could have been worse. 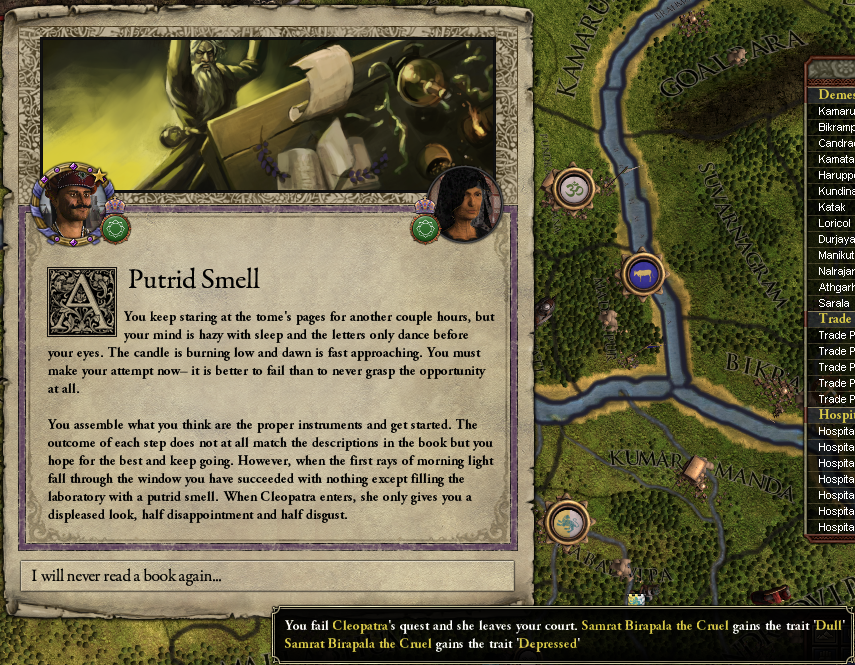 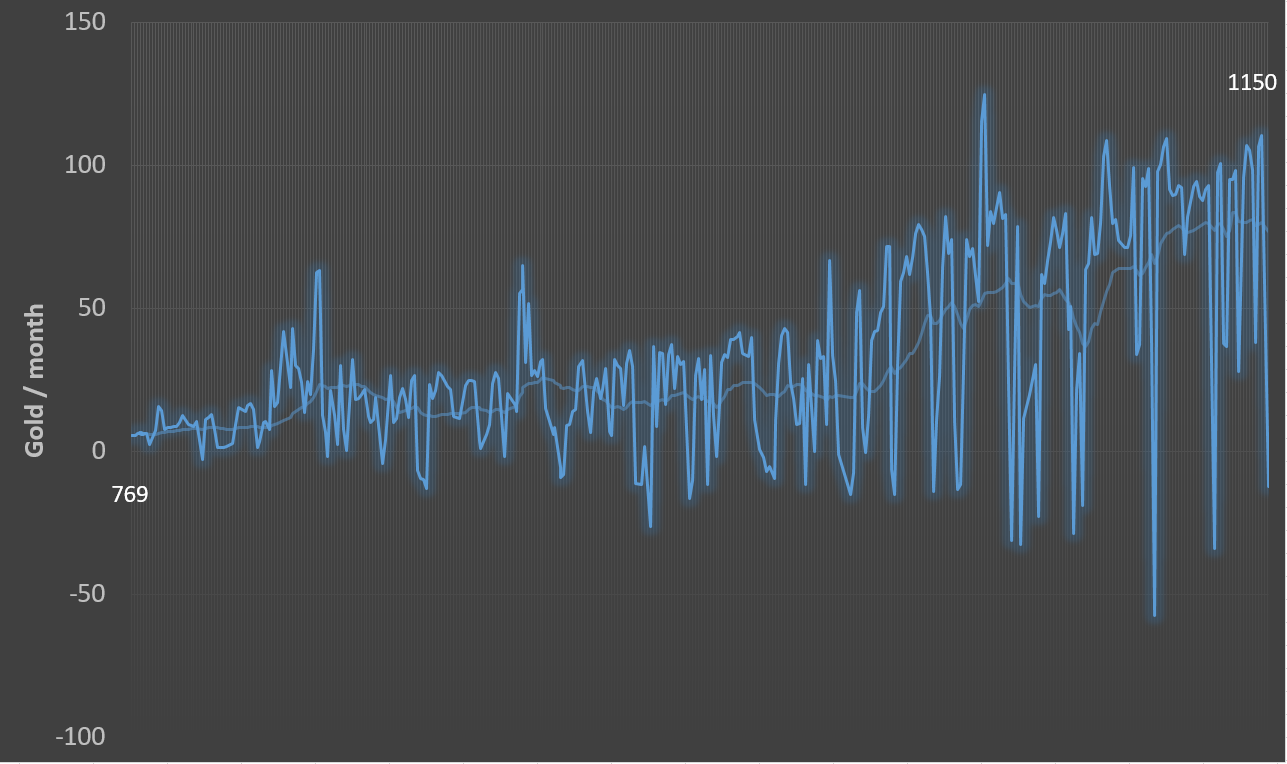 If all is going well in the empire, one might actually expect monthly incomes in excess of 110 gold/month. The plans are going accordingly.

Over the course of more than 150 years, the subcontinent has seen the following changes:

The difference between 1000 and 1152 for the rest of the world is shown below.

I need to chip away at the kingdoms in the south of India. The end is in sight!