The final century-and-a-half up to the end of 1444 saw a rounding-out of India’s claim on territory in the Middle-East, weakening some of the houses there in the process. India’s leaders also spent significant effort maintaining internal cohesion as the scale of revolts became more threatening with the size of the empire.

In 1323, what had been House Mlechchha underwent a “rebranding” of sorts. A house that was once headed by a humble duke was now headed by the most powerful person in the known world, the Samrat Chakravartin.

Such a house deserves a more fitting name. “Mlechchha” is a Sanskrit term that can be used as an insult with a meaning akin to barbarian. This house needed a name, derived from Sanskrit, that reflected their immense accomplishment to this point.

I settled with “Adi“, which is a Hindu term meaning “the first part of reality”, related to the first cause. This is fitting; this house were the first to unify India, and one day they will be the first to conquer the world, and finally the galaxy.

Adi is also less of a mouthful than Mlechchha!

I often struggled to find ways to spend my cash reserves during this time period, which is better than the alternative, admittedly. Having maxed-out all of my own holdings, and even some vassal holdings, I decided to improve the Merchant Republic-built trade ports in India’s coastal counties.

My hope was that the economic improvements would trickle-up to me. I saw marginal improvements, but it’s difficult to tease some of the economic aspects of this game apart. I didn’t check, for example, how my vassals ended up utilising their new tax income; did they improve their own holdings, or did they simply plot more? Unless one watches very closely, it’s difficult to tell.

After unifying India, I cast my greedy gaze upon the lands of the Caliphs of the Middle-East. I made some progress in this direction last time; before finishing up to 1444, I really wanted to make my borders look “pretty” and avoid the dreaded border-gore! That was the largest deciding factor in wars from 1300 onwards!

The largest territorial gains came through Holy Wars, which gave me a renewed reason for adopting Hinduism as my leader’s religion. There was some contention between Hinduism and Jainism between heir and parent; I wanted my leaders to be Jain late in their reign so they could choose an heir and stabilise the realm before the succession, but wanted the heir to be Hindu so they could commit Holy War.

The problem is that my heir very often turned out Jain because my ruler was Jain for a significant portion of their life. The answer to this is to make sure the heir is educated by a Hindu. This way my rulers always had a Hindu to Jain transition at around age 40, or if they became very ill.

After sorting out this theological conundrum, I was free to cycle through conquest and consolidation for the various leaders in this time period (six in all).

I faced up against most Muslim realms due to extensive claims on my part as well as alliances and defensive pacts on their part. After all was said-and-done, I had the southern and eastern coastal regions of the Arabian peninsula plus most of present-day Pakistan, Afghanistan, and Iran.

Given my place in the world in this particular CKII playthrough, I spent very little time concerned with European powers. I rarely interacted beyond the Middle-East or Asian Steppes; there were maybe one or two incidents with the Byzantine Empire and the Empire of Carpathia in Eastern Europe.

This was largely because no solid power emerged in Western Europe. The Umayyads (Empire of Hispania) didn’t seem to project much power further into Europe, instead concentrating on Africa. England, Danmark, and Austrasia made progress throughout the game but failed to bring their activities to a head.

And then. Something interesting happened that gave me hope for a strong European power that would challenge me in the centuries to come.

King Hugues ‘the Bold’ of Austrasia was married to the Queen Eadhburh ‘the Temptress’ of England. Austrasia owns significant portions of modern-day France and Germany and managed to take a chunk out of the Umayyads, making the first incursion into the Iberian peninsula I’ve seen in the game.

England-proper was fairly representative of how it is today with a few counties owned by Aquitaine and Ireland. It also, however, had managed to vassalise Danmark which, if you’ve been following, was by far the most influential Scandinavian realm. England had also managed to turn Poland into a tributary; Poland by itself was significant European power. 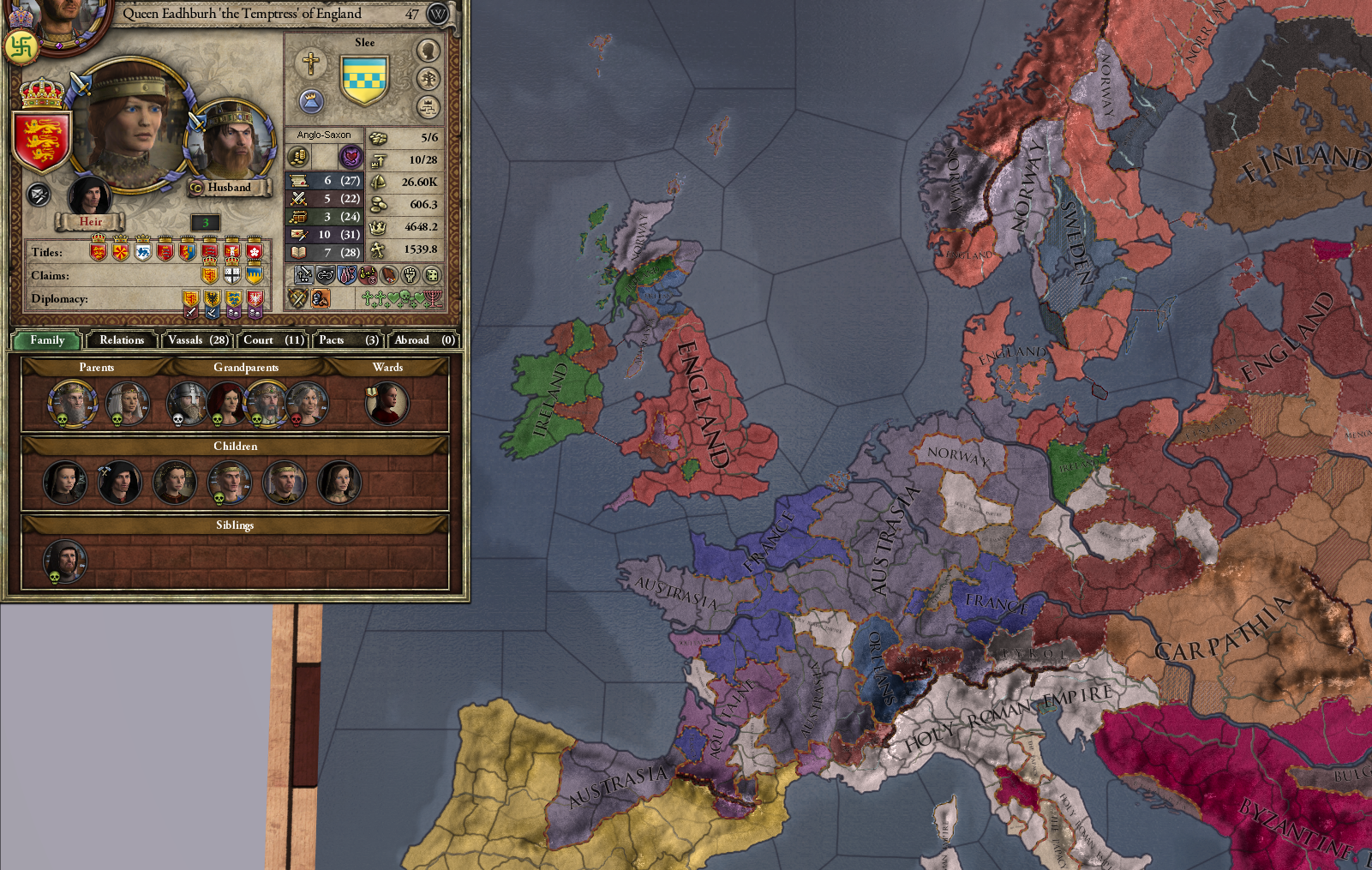 Tributaries end on succession, but this painted an interesting picture. Prince Aubry of Austrasia, son of Hugues and Eadhburh, was ostensibly the heir of both England and Austrasia, which would unite vast swathes of Western Europe under one banner when he inherited.

I was left wanting. England’s Elective Gavelkind succession put a totally different dynasty in control of that title. Aubry inherited the thrones of Austrasia and Scotland (somehow), Danmark regained independence, and the Polish tributary was no more. Things had, sadly, returned more-or-less to the status quo.

If I didn’t know any better, I’d say that RNGesus ramped-up efforts to watch India fall towards the end of this game. Faction leaders were practically frothing at the mouth for decades as I tried to stake my final few claims on the Middle-East and adventurers made feeble attempts to claim my titles.

There was a particularly troubling period of time during which I genuinely feared that India would cleave in two. It began in 1384 as I’d finally finished fabricating claims on four counties that would make a war worthwhile. (One can press all fabricated claims simultaneously in a war.) The timing was perfect – my targets in the Middle-East were fighting other wars, including a decadence revolt.

In 1385, however, just over a year since declaring my claims for various Sheikhdoms, there was a revolt; the India Revolt League Independence War.

I’ve faced this sort of situation before. Mechanically, I think that factions must identify my decreasing manpower due to fighting other wars, which might tip them just over the power threshold to blackmail me. I’m not sure if they’re able to take into account how wealthy I am at any given moment, but at this point I’m pretty stinking rich, so I’m not beyond hiring a couple of mercenary bands to help put down a revolt.

In 1387, while fighting wars on two fronts, I become incapable. Also triggered during this year is an adventurer threat. So I could well be in the middle of three wars, incapable of any plots, in just a year’s time. Indeed, Samudravarman’s Host Claim on Gujarat War began in February of 1388.

Nine months later, on the 26th of November 1388, I die comatose in bed. This, of course, removes my claims on the four Sheikhdoms I was originally trying to acquire. With depleted levies and retinues, I return my armies to India-proper to fight the host claim and the independence revolt.

It wasn’t until 1392 that I was able to cap off all the wars. The revolt leader, Govindapala, goes straight into the oubliette. I want him to hear of all the terrible news befalling his family…

Up until this point, I’d tried to play fairly benevolently – at least as far as my own subjects were concerned. No more. I was constantly murdering people. And not just those that were heading factions, but those that posed any modicum of threat… and their wives, and their mothers, and their children. Entire dynasties were eliminated at my whim.

For the first time, I was using leaders that focused heavily on Intrigue so that I could imprison enemies at the same time I was plotting to murder another. Everyone went into the oubliette.

I’m aware I could have gone much further than this, but there was still peace to maintain. The final decades were incredibly peaceful because I was offing threats before they became anything substantial; I’m not sure why I didn’t do this to begin with!

As mentioned earlier, I started running out of places to spend my cash reserves. I was seeing minimal gains from improving my or my vassals’ holdings any further. In order to deter revolts and win wars quickly, I permanently hired several mercenary bands. This reduced my base monthly income, which mattered little as there weren’t many places to spend it. 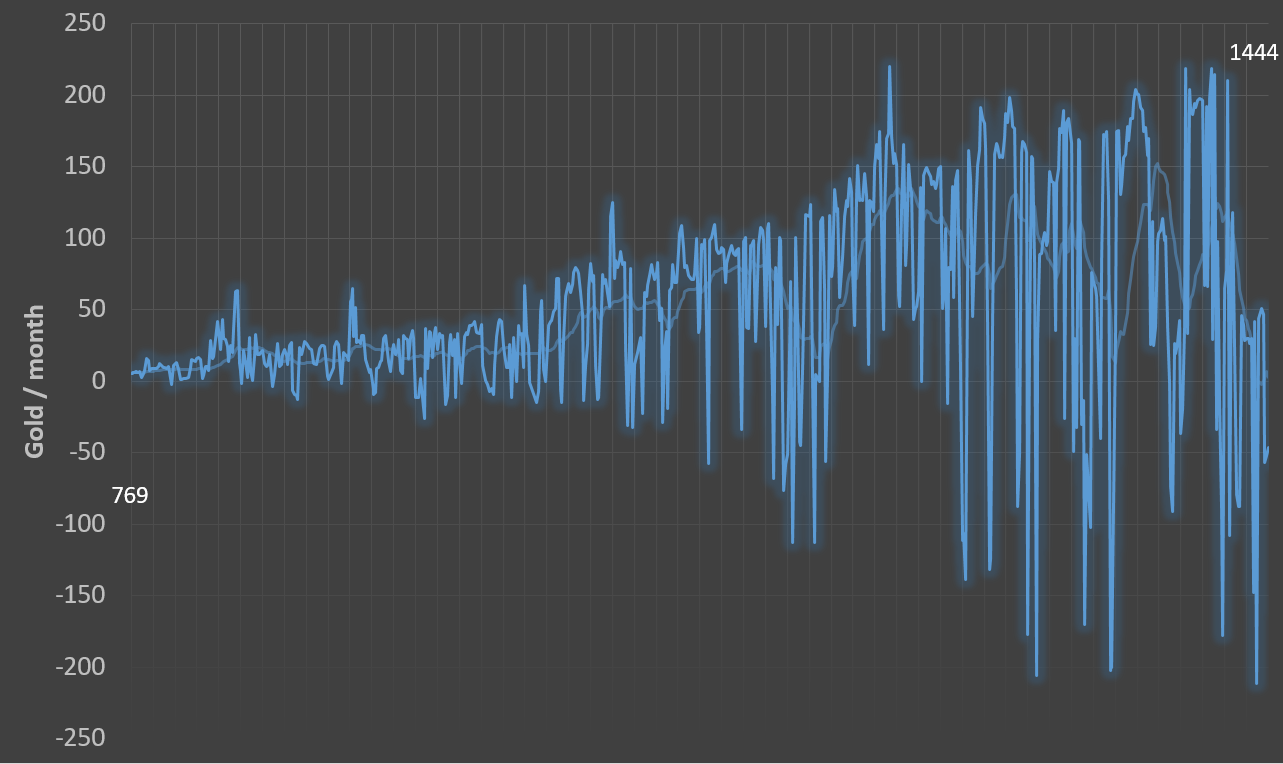 End of an Era

India has encroached into the Middle-East and the Arabian peninsula.

The difference between 1300 and 1444 for the rest of the world is shown below.

Within the limited geopolitical scope of CK2, the world is dominated by a handful of powers, none of them historically powerful in 1444. 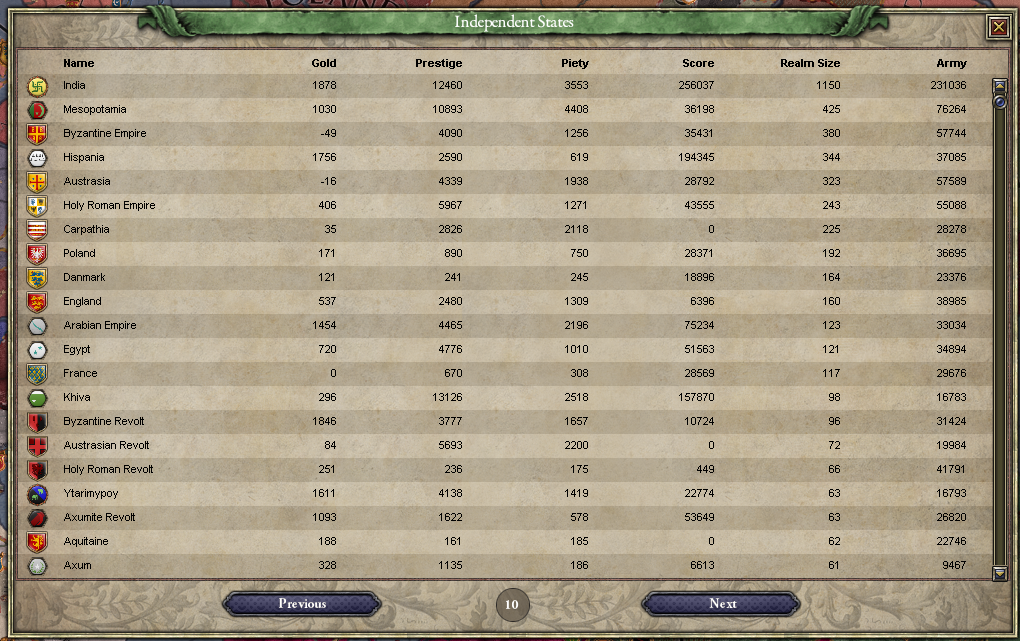 India, of course, has a significant lead over second place, the Umayyads of Hispania. Under their rule, the Iberian peninsula remains Muslim.

Austrasia is a burgeoning power in Western Europe, balanced by Poland and Carpathia in Eastern Europe. Byzantium remains, for now, although the caliphates of the Middle-East have reduced their grasp on the Anatolian plateau.

After a succession of decadence revolts, the Uwaysids retain their claim on the majority of the Middle-East, although there are several smaller Muslim states at the sidelines.

The Mongolian Empire has failed to extend beyond the Steppes and, even there, they share their stake with others.

And so, on the 10th November 1444, the sun sets on the last day of the Medieval era. The world is unaware that, tomorrow, it will awake to the Age of Discovery.

At this point I elect to end the game of CK2; 11th November 1444 marks the start-date for Europa Universalis IV. The game state can be translated over with the EU4 Save Converter DLC.

The next post will see me playing EU4 and will detail some of the finishing touches I put on the converted save file to make the world more representative of the one I left behind.